Blackpool was the scene of a world record breaking challenge as two vans were pulled around a resort running track.

James Baker, 35, of Grange Park, and brother-in-law John Darwen, 30, from Avenham in Preston broke the world record of the furthest vehicle pull in 24 hours.

The pair were each pulling a Citroen Berlingo van and finally ended up doing 88 laps at the running track of Stanley Park Sports Arena at the weekend.

It wasn’t all smooth running after the men had to discount their first hour of pulling the vans.

James said: “We had a few problems at the beginning but we managed to resolve them fortunately.

“The GPS failed on the first hour and we had to discount it as part of the record but we called that our warm-up anyway.”

The vans each had a driver and weighed 1.6 tonnes. The record to beat was 21.1 miles and the men achieved 22 miles after setting off at 11.02am on Saturday. 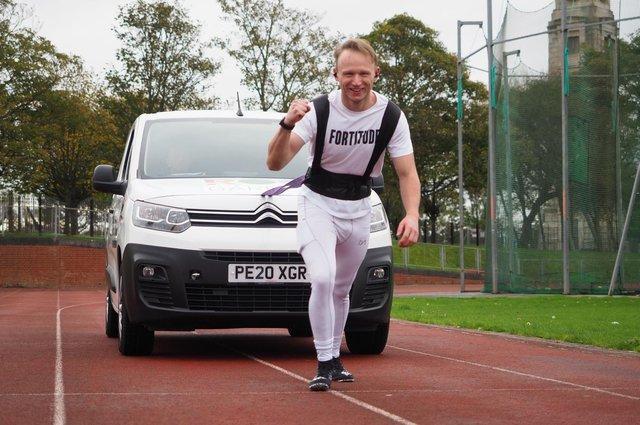 The pair were also completing the challenge to fundraise for Redeeming Our Communities and, in particular, a project aimed at transforming needy residents’ gardens.

James and John want to do it again to try and break their own record.

James said: “We are aiming for April for our next attempt and it would be good to do 26 miles, so we will have done a marathon.

“We have learnt from this experience and reckon we can go even further but hopefully we can get the backing of a local business or sports firm to help us do that.”

James Baker pulling the Citroen van at the weekend

James and John are hoping to hear back from Guinness World Records soon for confirmation that it will be official.

Go to Just Giving to donate.

The pair plan to break the record again next year

We use cookies to ensure that we give you the best experience on our website. If you continue to use this site we will assume that you are happy with it.OkPrivacy policy