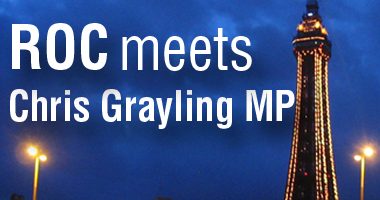 On September 17th Debra and Rebecca from ROC HQ traveled to Blackpool to meet with Chris Graying MP and Secretary of State for Justice in Blackpool North, his constituency. Steve Haskett hosted them at All Saints Church and Paul Maynard MP also attended having organised the meeting.Debra explained the vision of ROC since it’s inception in 2004 and gave a national perspective including how ROC is successfully addressing a variety of social needs in communities across the UK.Rebecca, ROC’s National lead for ROC Restore, their restorative justice project explained about the growth of the project in just twelve months with seven projects underway. She spoke about how ROC was invited to start work in Blackpool when the Criminal Justice lead Tim Ewan approached us in early 2013.A ROC Conversation community consultation took place in September last year and was attended by over 120 people from agencies across Blackpool.ROC Restore has trained volunteers and community based restorative justice is now up and running with referrals coming in from the Police and housing association. Blackpool also has a ROC Care project, elderly befriending scheme and plans to launch three ROC Cafe youth projects in the next year.