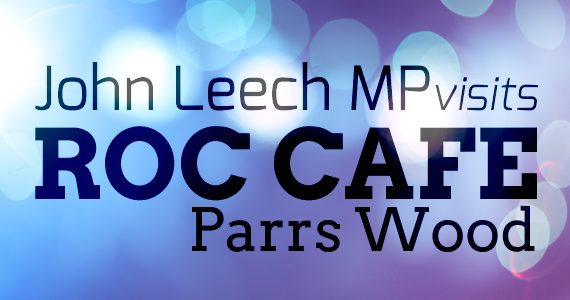 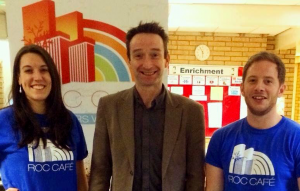 John Sampson Macfarlane Leech (born 11 April 1971, Hastings, East Sussex) is a British Liberal Democrat politician. He has been the Member of Parliament (MP) for Manchester Withington since 2005. In the 2005–2010 Parliament he was a member of the Transport Select Committee and was appointed a Shadow Transport Spokesperson in 2006.

John grew up in Chorlton-cum-Hardy, where his father became a Minister at Chorlton Methodist Church. He went to the independent Manchester Grammar School in Fallowfield, Loreto College in Hulme, and Brunel University in Uxbridge where he studied History and Politics and also joined the Liberal Democrat Party.

John has been a friend of ROC for many years and recently met up with Debra in Westminster, when she visited Portcullis House. John said he would like to visit the ROC Café in Parrs Wood, which is in his constituency. The ROC Café runs every Friday at the 6th form centre in Parrs Wood High school in Didsbury. Emma Gaze and Pete Dawson from Ivy Church run the project which offers a meeting place to young people every week in their after school club.[/vc_column_text][/vc_column][/vc_row]